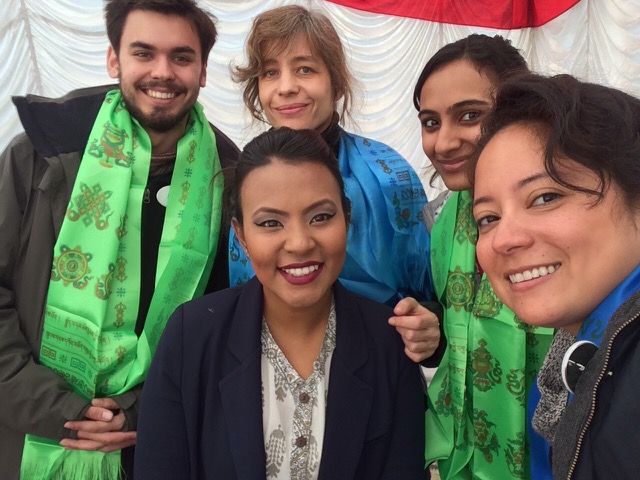 A prototype that emerged from our bindi project with women in Tripureshwar: how prototyping and collaboration can trigger change. 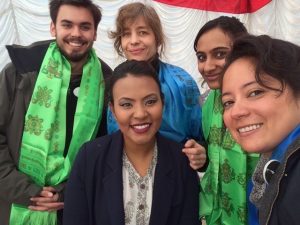 In January 2016, a DFA NYU  went for a research and prototyping trip to Tripureshwar (Kathmandu, Nepal) in the context of a winning idea that we were piloting with WHR. During that trip, we used a card sorting activity around safety and light (or lack of light) emerged as a major issue. We discussed with the women the options they currently had and while they were electrical poles nearby the slum, they could not have access to electricity because of their status as a slum. Some of them were trying to work on this but this was a very long-term issue.

Quick ideation and looking for inspiration

The next day, we shared with the women our thoughts and findings including the solar paint. They were first worried as they did not know what solar paint was but when we explained them, they loved the idea and said that they would be willing to try it out. We also explored with them different situations and figured out that they did not want to carry a lamp with them and that the fact that there was some light (glow was enough in that sense) gave them a sense of safety (this echoes the broken window theory which suggests that the environment inspires – or does not – a sense of safety). 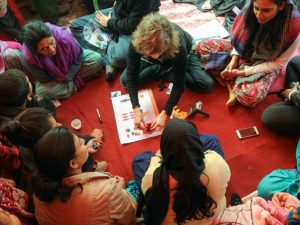 Back in New York, we explored a bit further the different further. Ashwin Gopi, one of our team members since the beginning of the Bindi idea (who had not come with us to Nepal) took the lead on the prototyping effort. He contacted and tried to look at the different technical options. He eventually found a “powder” (Europium-doped Strontium Aluminate), which mixed with epoxy, would create the glowing paint. After several iterations, we were ready to show our first prototype at our DFA NYU Project critique.

Ashwin kept iterating and then it was time to sort out the materials and figure out where we could find them in Nepal.

A collaborative project between Kathmandu and NY

In the meantime, I contacted Bikash Aryal, the captain of the Sahayogi Youth Club, whom we had met in Kathmandu, and Saru Shipalkar and Pushpa Joshi from the Bakhtapur Youth club. I had originally been in touch with Pushpa and Saru during the Women Safety Challenge on OpenIDEO and then had invited her to join our team when we started piloting with WHR. Pushpa and Saru had been facilitating sexual health workshops with the women in Tripureshwar and they were also mentoring the Sahayogi Youth Club.  They both agreed to help Bikash and his friends who had said yes without a hesitation. They were all excited by the potential impact but also by the possibility to prototype and experiment concepts we had discussed with them during our trip in Nepal.

We started by exploring with them what were the best locations: we had our notes and photos and we asked them also to go and do some research in the field. We explained them that we need places that felt unsafe to them and others in the slum, but we also needed walls that were exposed to the sun during the day. 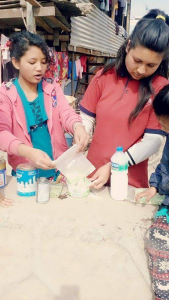 In the meantime, Ashwin has found that the cheapest and most convenient supplier was based in China. We still needed to find transparent epoxy. Bikash was going to various stores in Kathmandu but could not find anything. Pushpa and Saru had a hard time too. We even enlisted a Nepalese NYU Tandon student who had offered to help: his sister who was living in Kathmandu also started searching.

In the meantime, the powder had been delivered to Saru. And Pushpa and Bikash went to a paint store they had found and Pushpa reported:

“Today I went to Asian paints with Bikash. We mixed the magic powder with the clear and transparent epoxy (The solution was milk white at that time but according to the shopkeeper, it will become transparent when dried) and applied on a piece of paper. The paper was wet at that time so i brought it home. After exposing the paper in front of the fluorescent light for some seconds, I turned the light off and it glowed very brightly. It literally worked as a small torch.”

It looked very much like the prototype that Ashwin had done in NY. That was an exciting moment.  Eventually, it seemed we were ready to prototype in the slum. But it was without counting with the Monsoon. It was raining heavily and we had to wait… and we waited until end of October when Biskah, Puspha and Saru painted one wall in the slum – but this was not as successful as the first small test. After several email exchanges, we realized that they had used white, instead of transparent, epoxy because they had a hard time finding some. Pushpa asked her dad for help and the team eventually found some transparent epoxy and did a second prototype with five houses in February.

For this prototype, Bikash worked with 6 other members of the Sahayogi Saathi Club: Manju Tamang, Asmee Kuwar, Sagar Khatiwada, Isha Tamang , Shuva Maharjan  andShristi Pariyar) and shared with us their experience:

We painted only 5 houses. Why we only painted just 5 houses because from our observation we found that those 5 houses need this project so we just painted just 5 houses and next time when we do it again we will try to increase the number of houses. In the process first we asked them for their permission, and when they gave their permission we started painting. Those 5 houses gave us the permission and they also support and help us to apply the paint.

They painted mostly arrows as we had discussed different design earlier and we agreed with them to start with simple designs. On one house, they highlighted some obstacles that would glow at night: “We thought that highlighting obstacle will help those people to identify the obstacle at dark night.”

Bikash and his team remembered that prototyping was about testing an idea and in this case, it was not only about creating a paint that will glow, but a paint that will make people feel safer. So they went and asked for feedback:

After this prototype when we asked them about the paint and it’s effectiveness most of the house owner are happy to have it. But some of the house owner gave us some good advice regarding how we can make it more effective. And we will use this advice in other prototype of this “Light at Night” project. We also asked other people ‘how they feel about the paint?’ and in their response they really liked it and in night that paint help them to find the path. And some of them find this paint safer and nicer.

As we asked Bikash and his team to reflect on the process, they sent us a great set of learnings:

During this process my team and me learnt many things. We all did very hard work to complete this prototype. When we start this we all work together and when we got into some trouble we help each other. During the whole process we always tries to help and support each other. And we also learnt to respect each other’s ideas. To us this is not just a project like other previous project but this is like a learning phase to us. Throughout this whole project we always try to help and support each other.

If we got chance to do it in other similar community we will use all those advice, which we had received from this prototype. When we start this project in our community we didn’t have proper idea but now we got the idea how we can make it more effective. So in other project we will use all those advices. We feel great when we finish this live prototype of “Light at Night” project.

A few weeks after the prototype, Saru (who is working now  several hours away from Kathmandu) came to Tripureshwar to meet with the team and visit the houses.

She also suggested the team to go and talk with professional painters to learn more about painting and get some technical help. So that’s one of the next steps for the Sahayogi Youth Club team.

Ashwin and I kept in regular contact with the team and when we received Bikash’s email telling us that they eventually did the second prototype and that it was a success, we were both really proud of the team and happy for the people living in Tripureshwar. We are now going to support the Sahayogi Youth Club, Saru and Pushpa as they continue evolving the idea and the process so that they can hopefully go and do a prototype in another community. We are also really interesting in being able to monitor the perception of safety by community members. For example, will other families in Tripureshwar or in other communities ask for the paint?

What did we learn?

Looking forward to the next steps of “Light at Night”!

Timeline of the light prototype:

February 2016: Research on the different materials and technical options

March – April 2016: Prototyping in NY and finding the supplies

June 2016: First prototype of the mix in Kathmandu

Oct 2016  – First prototype on a wall in the slum. It does not glow much because they used white epoxy

The material is Europium-doped Strontium Aluminate (SrAl2O4:Eu), with Dysprosium-doped being a second option. It is a non-hazardous and non-radioactive substance that uses phosphorescence to absorb UV light and emit it as visible-spectrum light. For maximum effectiveness, select green (highest lumens), a large particle size (60-85 microns), and suspend it in a transparent medium like epoxy or acrylic in a 1:5 ratio.