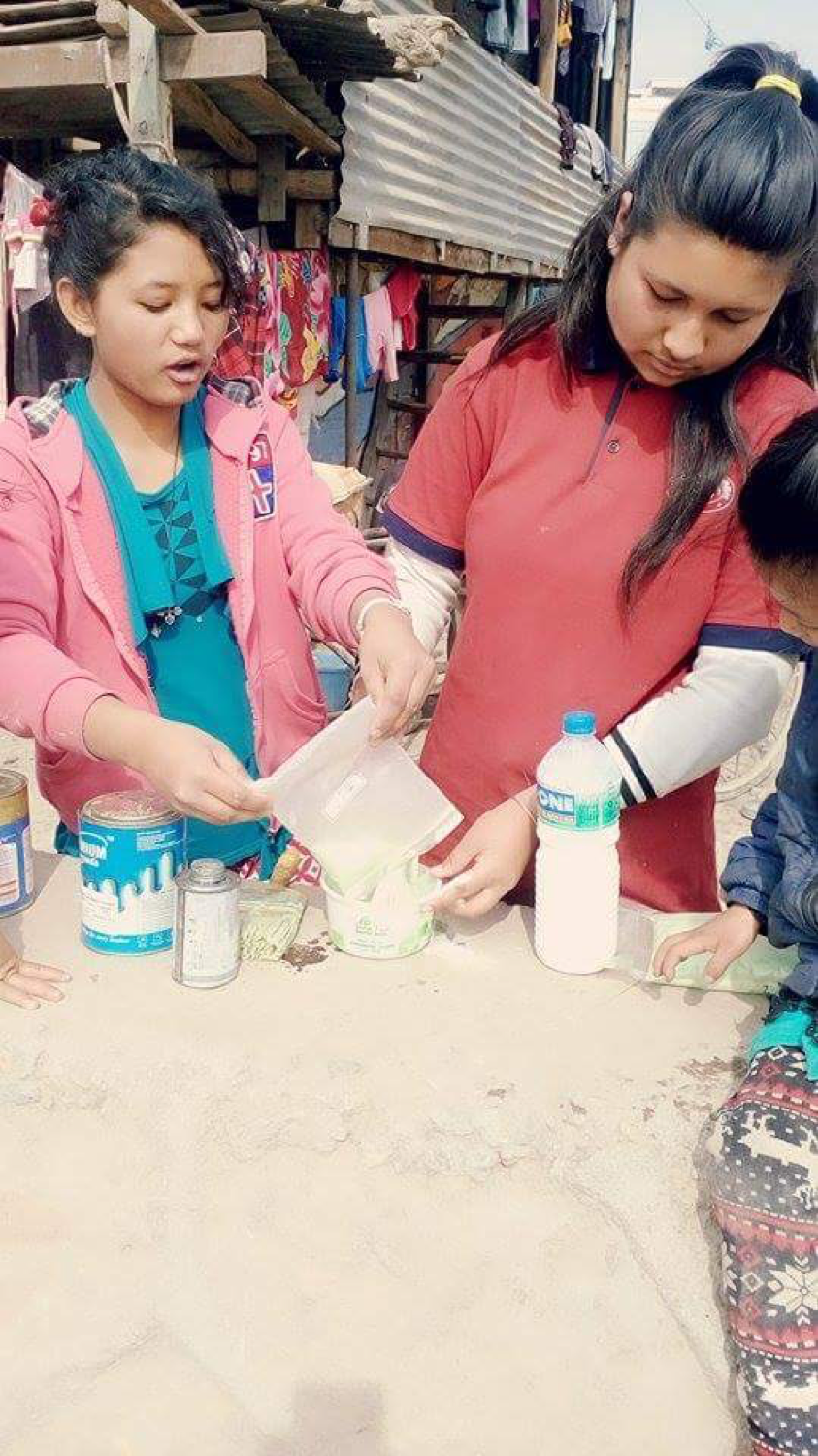 Professor Fayard and students pilot a program to provide women in low-income areas with skills and knowledge.

When the Design Tinkering Club at Tandon School of Engineering became NYU’s studio of Design for America (DFA) —a nationwide network of interdisciplinary student teams using human-centered design to develop innovative solutions for local and social impact—it marked a significant step for the club, which is advised by Professor Anne-Laure Fayard.

While the name of the group may have changed, its members’ creativity, drive, and energy remain the same. They have continued to work on some of the innovative and promising projects they started in their previous incarnation, and in recent months, among the most exciting of these has been the Bindi Project.

The project had its genesis when the former Design Tinkering Club took part in OpenIDEO, an open innovation platform that asks the public to develop solutions to a wide variety of social challenges such as health, education, and climate change. (The platform is run by IDEO, a well-respected global design and innovation consultancy.) In tackling the question of how to make low-income urban areas not only physically safer but more empowering for women and girls, Fayard and her students developed the idea of a community-centered program that provides women in low-income neighborhoods with the knowledge, skills and support they need to become leaders and catalysts for change with and in their communities.

The students collaborated with Women for Human Rights (WHR), a Nepalese NGO, to prototype and pilot the idea of providing women in one of Kathmandu slums with a training program encompassing leadership skills, health, and craft. That idea was one of only three ideas selected to receive funding from Amplify, a collaboration between IDEO.org and UKAID, the British Department for International Development. (Almost 600 ideas from around the world had been submitted to the Women Safety Challenge.)  The students ultimately aim to develop a downloadable open-source “toolkit” for use by organizations and associations willing to develop similar programs.

In January, wanting to test their ideas in the field, master’s student Rajni Chada, sophomore Noah Geib, and master’s student Leslie Martinez set out for a 10-day trip to Nepal, accompanied by Fayard. Hosted by WHR, they worked with 36 women participating in the program in a slum of Kathmandu. The main aim of the trip was to develop a richer understanding of the context and women’s actual needs and, through light prototyping, test some of the assumptions underlying their ideas. The insights and feedback would help designing the next phases of the pilot as well as refine the toolkit for NGOs.

Read on to learn more about their experiences, in their own words.

In only a few days, the team of four were able to develop trusting relationships with the women from the program and to develop rich insights. They learned not only how resourceful the women were, but how many issues and practices stay the same across cultures.

Rajni: “We arrived in Nepal with hesitation on how these women would open up to a group of foreign student who don’t even speak their language. It was incredible to have the women open up to us so quickly. They discussed their hopes, concerns and financial situations very frankly. We facilitated activities using visuals to encourage open discussion, where we discovered that the men were controlling the money that came in to the home. In some cases even spending it on alcohol or other non-necessities. We became worried that if the women were supported to earn extra income by making craft items or by other means, the male members of the household would simply appropriate that money as well. When we expressed that concern, however, the women inexplicably burst out laughing. They explained that they had no intention of telling their husbands how much they were actually earning and that they would deposit a part of that money into saving accounts for their children’s education. It reminded me of hearing similar stories from older female members of my own family, who sometimes hid away a portion of the household money as savings. Some things are just universal.”

While DFA NYU has collaborated for more than a year and a half with WHR, this was their first meeting face-to-face, and WHR had no experience with human-centered design. Thus, an important part of the trip was to nurture collaboration and share with WHR the design approach that is at the core of all DFA NYU projects.

Noah: “It was interesting to see that when we first arrived in Kathmandu, there was a tendency on the part of our hosts to want to treat us as donors or tourists and give us a sanitized look at the city and its people. They soon saw that we were there to act, not merely to tour, and with that established, we were able to ultimately accomplish a lot. Because WHR is accustomed to working in rural areas, working with us in an urban setting was eye-opening for them—and there were plenty of occasions in which our eyes were opened too. We found that many of our assumptions about what the women needed and wanted were wrong. They prioritized health and education over income, for example, because they knew that their earning power would be increased if they had more education and remained healthy.”

The team had to be able to communicate and brainstorm beyond cultural and language barriers: the visual tools they used were powerful, but having a Hindi speaker in the team was also crucial.

Leslie: “When working with a group that speaks another language, there will of course be a language barrier, but there are always methods of communicating beside spoken words. There are body language, facial expressions, tone, and visuals. Though we did not know how to speak Nepali, we were able to transcend that barrier by using lots of visuals tools for designing. We were also fortunate enough to have Rajni with us because she is a native Hindi speaker and Nepali people understand Hindi because of the influence that Indian (Hindi) media has there. In the next phase of the project we don’t expect to have such a large language barrier, but then again we will be working with an immigrant community. Like I said, there are always other ways of communicating besides verbal communication.”

Reflecting on the trip and its meaning for the development of the Bindi Project and for DFA NYU, Anne-Laure Fayard said,

Anne-Laure: “This trip has proved to me once again the power of human-centered design in developing rich insights and co-creating with users. It was a wonderful experience to share with Rajni, Leslie and Noah. I’ve been involved in this project since March 2014 and to be on the ground, working with the women was really gratifying. I was particularly impressed by how resourceful and smart these women are, and it was also exciting to be able to verify many of our core assumptions. Now that we are back, the journey continues as we need to make sure that our insights help inform the next phase of the pilot.  We are now working to pilot our idea with an association working with immigrant women in Queens in order to test our ideas further. More broadly, I hope that our trip and project will inspire many DFA NYU members, and NYU students in general, to prototype and test their own ideas.”